What is the Google Panda Update?

Let’s start with a brief history about Google’s Panda… It’s nothing new, it has been around for a while now. It was first released in February 2011 and has received a number of updates since then.

At the time of writing this blog post we are on version 3.2, here is a list of all the different versions of the Panda Update and the release date:

Some of these updates only affected US sites but a number of them were global.

The Google Panda update is a series of algorithmic tweaks that Google rolls out every few weeks. It’s aim was basically to lower the rank of low-quality sites and return higher-quality sites near the top of the results.

What does Panda eat?

As with everything Google is never clear on exactly what Panda is targeting/looking for on sites but from our own findings we have found that you can do your best to avoid being penalised by the Panda by avoiding having the following on your site:

How to tell if you have been affected

It should be very obvious if you have been effected by a Google Panda update, you will see a significant drop in traffic and positions on/around the dates I listed above. It’s a domain level penalty so your site could literally drop out of Google. 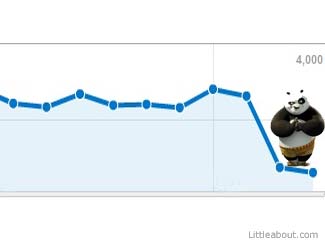 If the drop in traffic/positions did not happen on the above dates it could have been another minor tweak to the algorithm, it wasn’t necessarily the Panda.

I’ve been bitten by the Panda, what do I do?

You basically need to do the opposite of the things to avoid I listed above:

This was just a brief guide to the Google Panda update, I hope it has been useful and helps you avoid being penalised by Google’s panda updates.

Next week’s blog post will be covering what you can do if you’ve suddenly dropped out of Google but it won’t just focus on the Panda update, stay tuned.

PrevPreviousSecure Your Rankings by Securing Your Site
NextMy site’s disappeared from Google. Top 9 problems to be solvedNext